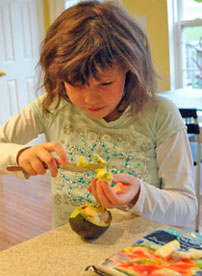 Taste For The Finer Things

The intestinal transplant New Zealander Matisse Reid, 11, received a year ago at the Children’s Hospital of Pittsburgh came with an unexpected surprise. The fifth-grader (Year 6) developed a sophisticated palate: a taste for squid, anchovies and olives. Her newfound love of food intensified Matisse’s interest in cooking. This March, she will become the kid food editor for monthly magazine, Cooking Light. Matisse’s illness, called idiopathic intestinal pseudo obstruction, kept her from digesting food. Twenty to 30 children in the United States have the disease, which made her intestines act as if they were blocked. Eating caused her major abdominal pain. Chief of pediatric transplantation Dr George Mazariegos at Children’s said: “She rarely looked at me and never smiled before the surgery. I never expected such an outgoing and delightful child as she is now.”