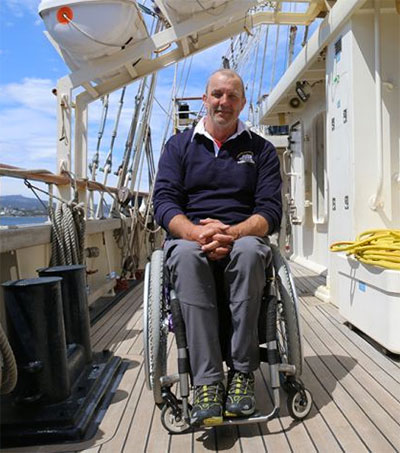 New Zealander Paul Shaw was a keen sailor until an accident 28 years ago left him in a wheelchair. Then he heard about the Tenacious, a tall ship run by a UK charity, so he quickly went online and found out how he could join the crew.

“I thought it sounded like a lot of fun, that’s why I jumped at the opportunity,” Shaw said. He joined the Tenacious in Adelaide for the journey to Hobart and will stay on until it sails into Melbourne this week.

The specially designed three-masted ship, which was launched in 2000, is crewed by a mix of experienced sailors and people with disabilities, who pay their own way.

Tenacious’ operator Jubilee Sailing Trust (JST) said the ship’s mission was to “take both disabled and able-bodied men and women to sea, to not only teach them how to crew a tall ship, but to promote equality, sharing, and to celebrate our individual differences by working together to achieve greater things”.

The Tenacious is fitted with design features not seen on other ships, JST said, with braille signage, wheelchair lifts, a speaking compass and a joystick to enable people with limited dexterity to helm the ship.

For Shaw, it has made sailing comfortable again.

“I don’t think you could be looked after a better bunch.”