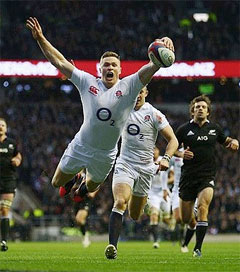 New Zealand, the world’s No 1-ranked side, was defeated by England 38-21 at Twickenham, bringing the All Blacks’ unbeaten run of 20 back-to-back wins to an end. It was England’s first win over New Zealand in nine years and one of New Zealand’s highest ever losses. England tore apart the reigning world champions with an exhilarating performance that saw them lead 12-0 at half-time and then run in three tries in eight giddy minutes midway through the second period, just when the All Blacks were threatening a trademark comeback. Steve Hansen, New Zealand’s head coach, was impressed by England’s youthful talent. “They have shown how good they can be. They are a young team and if you back them that will make them even more dangerous,” he said.