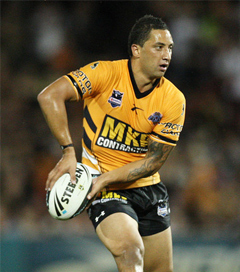 Benji’s Decision on His Future Key to Tiger’s Success

Kiwi Benji Marshall’s influence within the Wests Tigers is clearly evident with coach, Mike Potter, saying that the team will “bend over backwards trying to keep him here at the club”. Marshall burst onto the scene in 2005, playing an integral part in the team’s season which saw the Wests Tiger’s claim their maiden premiership, continues to have the ability to swing a game in the Sydney team’s favour. Currently locked in discussions with Wests Tigers regarding his future, The Roar reports that if the Wests were to lose their most influential player the team “would seemingly be taking a step in the wrong direction and perhaps undoing much of the hard work that he, Robbie Farah and Tim Sheens built in the wake of their 2005 premiership.” It is reported that Wests Tigers are offering Marshall $750,000 per year for the next two seasons. However, the Wests are clearly aware of his ability, not only on the field, but to draw crowds to games and a Wests team without Marshall is a team that has a smaller chance of victory come game day.