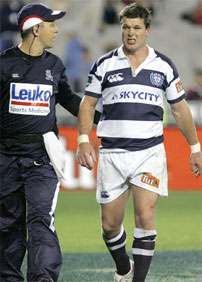 Solving the Problem of Concussion

Thirty-five-year-old former New Zealand, Blues and Auckland scrum-half Steve Devine, who was forced to retire from rugby in 2007, knows all too well how debilitating the long-term effects of concussions can be. In the years after suffering repeated concussions, Devine suffered almost constant migraines, fatigue, an aversion to bright lights and noise, and bouts of depression. The International Rugby Board has sanctioned a world-first study into the long-term physical and psychological effects of rugby injuries, with a focus on neuro-cognitive decline. Devine said he was pleased that a study had finally been commissioned. “If they get some information out of it, or they change a few rules around it to help protect against brain injuries, then it’s all good news,” Devine said.