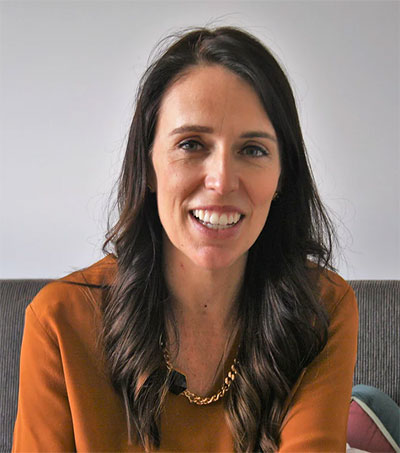 The first ever press conference to discuss a New Zealand prime minister’s pregnancy had come after a lot of planning. Winston Peters (the deputy prime minister and leader of New Zealand First, Labour’s coalition partner in government) was to babysit the PM’s seat for six weeks. Clarke Gayford would be a stay-at-home dad. The pregnancy itself was “a complete surprise” for a couple that had already begun seeking fertility advice – a note sounded to forestall criticisms that the nation should have been given louder warning of the first couple’s procreational ambitions.

“I definitely tried to look at it really dispassionately,” she says. “To think: what would someone who doesn’t know me at all, who may have a slightly different view towards my leadership, how are they going to take this news? I really tried to think about it from that perspective. I think probably they’re looking for certainty. And the best way I can provide that is by providing a plan. And so that’s what I really thought through: how can I really demonstrate that, yes, amid all this happy news, I have a plan.

“Also because I wanted people to know, given how soon it was after being elected, that I took this job really seriously. I felt like the best way to convey that was to show that I’d thought it all through, surprise or not.”

“I think people have all sorts of things that happen in their lives, mine’s just particularly public,” says the prime minister.

“People see my life list writ large. And I think, if anything, you probably realise how most of us at some point just put things in compartments. Sometimes, whether rightly or wrongly, we just deal with it later. I just haven’t done any of that yet.”

Original article by Toby Manhire, The Spinoff, The Guardian, February 1, 2018.