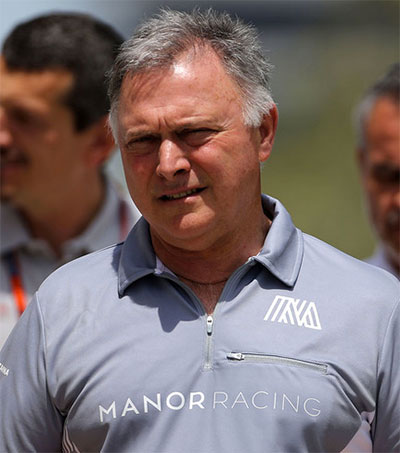 When Manor racing director Dave Ryan started working for the McLaren Formula One team in 1974, the New Zealander was handed a mop and told to clean the floor. The job got more complicated over the next 35 years.

The former world champions, founded by New Zealand-born racer Bruce McLaren, recently marked the 50th anniversary of their debut in Monaco and what Ryan knows about the team could fill a library.

Now working for back-of-the-grid Manor, minnows with big ambitions and powerful Mercedes engines, the 62-year-old lived the highs and lows at McLaren.

A mechanic to Britain’s 1976 world champion James Hunt, Ryan became chief mechanic in 1982, team manager and then sporting director before leaving in 2009 in the midst of a furor involving Lewis Hamilton and race stewards.

He worked with champions like Ayrton Senna, a six-times Monaco winner, Alain Prost and Mika Hakkinen as well as now triple champion Hamilton.

“McLaren’s a team that’s rebuilding. They’ve been rebuilding for the last few years and at the moment the signs are looking like they might have found a direction,” Ryan said.

“I have been through some really good times, and difficult times with McLaren, but the quality always came through in the end.”

Only Ferrari, the sport’s oldest team, have won more championships than McLaren’s eight constructors’ and 12 drivers’ crowns between 1974 to 2008. Ryan was there throughout.