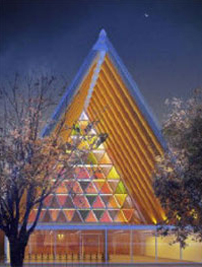 “Christchurch, New Zealand, where an earthquake last year killed 185 people, is still struggling with how to treat another of its casualties, the city’s Anglican cathedral,” Wall Street Journal reporter Eric Felten writes, beginning an article headed, “In Praise of Permanence”. “With its spire and sections of ceiling and walls collapsed, Christchurch’s Anglican bishop has declared the old pile too expensive to rebuild. Instead, the diocese has decided to toss up a temporary church designed by Japanese ‘emergency architect’ Shigeru Ban. The roof for the Christchurch sanctuary is to be made of Ban’s signature tubes, which instantly earned the proposed building a nickname: The Cardboard Cathedral. [And] if the temporary chapel isn’t Ban’s best work, it does have this going for it – it isn’t permanent.”