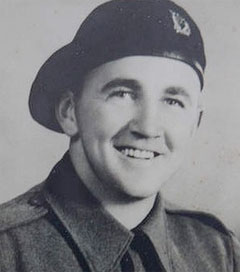 New Zealand World War II veteran Frank Harlow, 100, joined fellow New Zealanders living in Australia at their first ever reunion at the Sydney Maori Anglican Fellowship Church of Te Wairua Tapu in Redfern, Sydney on 11 August. Harlow’s 100th birthday was on 10 August and six of the 13 men expected to attend are over 90 years old. Harlow, a dairyman and member of the voluntary Territorials during the Great Depression, enlisted in 1939 and served with the New Zealand Expeditionary Force in North Africa, Greece and Crete.

“On Crete they dropped 6000 German paratroopers on Allied positions. I had a bren gun. I used it. I do not know if I killed anyone. I don’t want to know,” Harlow said.The reunion celebrated the birthdays and the 75th anniversary of the New Zealand Sub-Branch of the Returned and Services League in NSW.

Harlow was presented with the korowai presented to his mother by Ben Biddle NZC (the equivalent of the Victoria Cross). It has been stored at the Whakatane Museum for nearly 50 years.