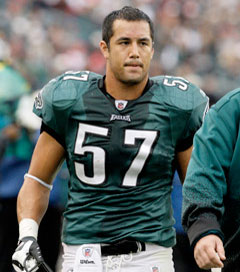 New Zealander Nic Purcell “is the most improbable player in [Philadelphia] Eagles camp this summer”, according to Comcast SportsNet Philadelphia. The 27-year-old lineman grew up playing basketball and rugby and never set foot on a football field until he was 24. “It’s fun, I enjoy it, but it’s a little bit stressful for me, especially with the up-tempo offense that we have here,” Purcell said. “It’s a lot to take in.” Purcell’s story begins in Temple View, where he attended Church College, a private high school operated by the Church of the Latter-day Saints that has since closed. As you can imagine, football isn’t very big in New Zealand, and Purcell’s exposure was limited to a few games he saw on TV. “We watch it, but no one understands it,” he said. “We just kind of watch it to see people put on big hits.” He and wife Madison decided to move to the US, where Purcell planned to study kinesiology. “I applied to Division 1 universities – not to play football, but just to go to school,” he said. “But my high school grades weren’t the greatest, so I had to take the junior college route.” That route took him to Huntington Beach, California, where he found himself at Golden West College, a two-year school about half an hour south of Los Angeles. Purcell wasn’t a football player, but he was big. And at 6-foot-6, 255 pounds, he was quickly spotted by one of the Golden West football coaches. “He just saw me walking around and said, ‘Hey, you want to come give football a go?’” And that’s how Purcell became a football player. He joined the team in spring workouts his freshman year, the spring of 2011. And Purcell, now 6-6, 300 pounds, showed enough to earn a contract and a chance to remain with the Eagles throughout the offseason. He’s gotten farther than he could have imagined just a couple years ago.