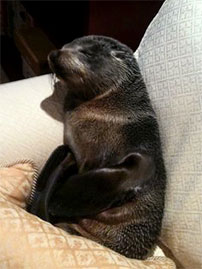 After A Hard Day’s Travels

A Tauranga woman thought she was hallucinating when a clattering noise prompted her to run downstairs to the kitchen and check on the cats, where she found a baby seal, who then waddled into her lounge, onto the couch, where it fell asleep. The seal pup had wriggled through Annette Swoffer’s cat door. After calling a neighbour over to verify what she was seeing was true, Swoffer called the SPCA. “They were giggling away and I’m saying, ‘I’m not drunk, I’m not lying,’ there’s a seal in my house,” she told the New Zealand Herald. The SPCA called the Department of Conservation, which was already on the hunt for the missing seal, who had been spotted traipsing in someone else’s garden earlier in the afternoon. The department removed the stray pup and returned him to the water.