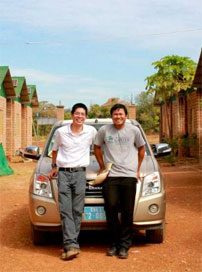 Palmerston North City Council civil engineer Kelvin Au (left), 25, is putting his skills to  good use in Cambodia as part of a Habitat for Humanity one-year placement, organized via Engineering Without Borders, building…

Home Made in Nelson

A Nelson family of six achieved their dream of home ownership recently with the help of Habitat for Humanity International and 11 American volunteers. Oregon Live reporter and volunteer DK Row writes: “The Jeffrieses…