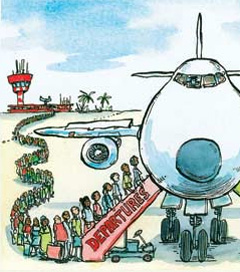 New Zealand is no stranger to the ‘brain drain’ phenomenon, having experienced substantial losses of highly skilled talent for decades. The country is now at the point where the Organization for Economic Cooperation and…

Back to the Nest

According to Time Asia Pacific, globetrotting NZers are returning to their native shores in record numbers. 2002 saw a 13% increase in Kiwis coming home and a 28% drop in numbers leaving. Analysts believe both economic…

More centric thinking, this time from London’s Observer, “New Zealander’s are leaving their country in droves, placing a strain on the economy and painting a grim picture for the future.” Our opinion: New Zealand Edgers of the…