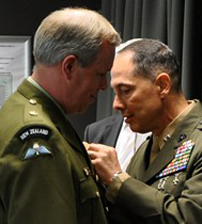 New Zealand intelligence expert Upper Hutt resident Major Rory McGregor was among 25 New Zealand Defence Force personnel to receive US military medals from visiting Major General Peter Talleri, the Okinawa, Japan-based commander of US Marines in the Pacific. The ceremony, which was held in Wellington, was just the second time New Zealand troops have been awarded US honours since the Vietnam War. Major McGregor said he was “deeply honoured” to receive the prestigious Bronze Star, which was awarded for his work as coalition’s deputy director of intelligence in Kabul from July 2005 to January 2006. The medal is the fourth-highest US combat award, and one seldom given out. General Talleri said: “As far as I’m concerned, we’ll serve side by side with them any day of the week — they’re great, great warriors.”