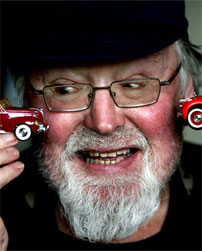 Tilly the Force of Nature

Wellington actor and artist Grant Tilly, well remembered for his performance in The Daylight Atheist, has died, aged 74. Having starred in many stage and television productions including Foreskin’s Lament and Gliding On, Tilly is known for being a “force of nature” as an actor who portrayed convincing roles. Tilly co-founded and designed Wellington’s Circa Theatre, the professional theatre company, in 1976. He designed the theatre twice: when it was first established in the old Ilott building and when it moved near Te Papa. Cartoonist and playwright Tom Scott recalled Tilly’s power as an actor, particularly in his solo performance in The Daylight Atheist, Scott’s play based on his alcoholic father, excerpts of which were played at Tilly’s funeral. “Grant had a heavy drinking dad as well, another brilliant dad who never realised his potential, so Grant was able to capture the intelligence, anger and self-pity.” An accomplished artist, Tilly drew cityscapes with David McGill for The Evening Post. Complete Cityscapes, a book containing the whole series which ran from 1976 to 1982, is to be launched on 11 May. Scott described the drawings as an “enduring legacy, depicting Wellington accurately and delicately in a way that could never have been captured in photos”.