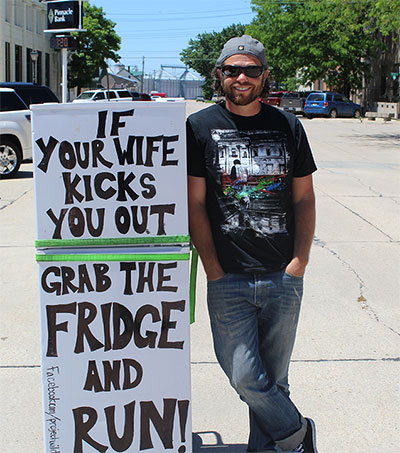 Rob Cope Thumbing His Way Across US with a Fridge

People travel across the United States in several different ways; some by bus, plane or car – some even hitchhike their way from place to place. But 42-year-old Wellington builder Rob Cope decided to hitchhike with his five-foot refrigerator after his wife kicked him out of his house in New Zealand two years ago.

A reporter with Wyoming newspaper the Uinta County Herald catches up with the traveller, who is promoting his new book, which deals with divorce and Cope’s own personal journey learning to deal with such a life-altering event.

Cope is the founder of Project Wildman, a charity which brings men together round a campfire, and is author of Men Wanted for Hazardous Journey and newly published If Your Wife Kicks You Out Grab the Fridge and Run!

He will hitchhike from San Francisco all the way to New York, where his flight leaves back to New Zealand on 28 June.

Cope’s refrigerator acts as his suitcase. He keeps his food, clothes, tent and sleeping bag in it, and he moves it around with a handcart. He stands on the side of the road with his thumb out, waiting to get picked up.

“I’ve gotten to know a few people along the way who have taken me the extra mile – like the ride today, they weren’t even coming here; they just went an hour and a half out of their way to drop me here so that I could get into Wyoming, where it is legal to hitchhike, because in Utah it is illegal.”

Cope is trying to go east of Cheyenne so he can get to Mount Rushmore to take a picture with his refrigerator. He has already travelled through Reno, Tahoe, Yosemite, Death Valley, Las Vegas, Salt Lake City and Evanston.