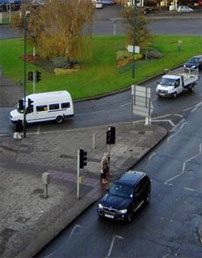 Reversal Of The Right

“New Zealand is finally yielding to the rest of the world when it comes to its unique set of road rules, after decades of confounding drivers from overseas,” Nick Perry writes for The Kansas City Star. For nearly 20 years, New Zealand has been the only place on Earth to force vehicles hugging a turn at an intersection to yield to traffic making a wider arc across the intersection. That has now changed with right-turning traffic now having to give way to oncoming left-turning traffic at intersections. Just why New Zealand introduced such a quirky set of rules 35 years ago remains unclear. Some argue that the rules encourage civility by allowing cars making the more difficult turn to go first, but defenders are few. The New Zealand Transport Agency, which implements road rules, says the switch will speed traffic flows, reduce accidents and avoid an estimated one fatality and 97 injuries per year.”