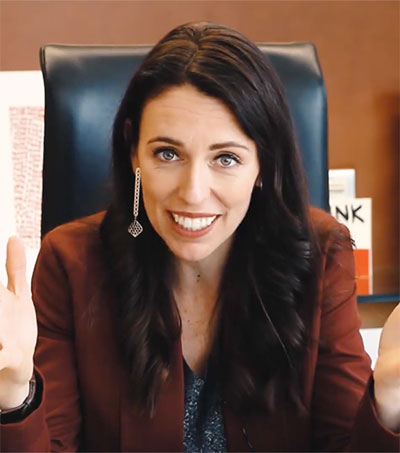 Jacinda Ardern, who became New Zealand’s prime minister in October, attracted international attention when she denounced television interviewers who had asked whether she planned to have children if elected. Ardern, 37, told a television presenter that it was “unacceptable” for women in the workplace to have to answer that question. Ardern has just announced that she is expecting her first child, due in June.

She said her partner, Clarke Gayford, the host of television show Fish of the Day, would take a leave from his job after the birth to become a stay-at-home parent.

Although she would be the first New Zealand leader to give birth while in office, Ardern played down the idea that her case was particularly special, saying that she was “not the first woman to multitask,” nor the first “to work and have a baby.”

Ardern said she planned to work right up until she gives birth and would then take six weeks of parental leave. During that time, she said, Deputy Prime Minister Winston Peters will assume her duties.

After that, Ardern added, she planned to return to “full duties,” with Gayford travelling with her and their child as often as possible.

Ardern will be the first leader of New Zealand to take parental leave.

Social media sites were flooded with celebratory messages from New Zealanders after the announcement, with silence from the critics who had questioned Ardern’s family plans before she took office.

Early in her tenure, Ardern helped pass a bill that extended paid parental leave in New Zealand to 22 weeks from 18, but her baby is expected to be born before the bill takes effect on 1 July. New Zealand allows parents to split the allotted leave between them, as Ardern and Gayford plan to do.

She is believed to be the only national leader in recent years to give birth while in office. In 1990, Benazir Bhutto gave birth to her second child while she was the prime minister of Pakistan.