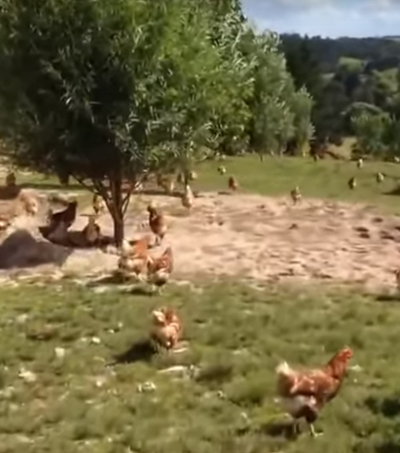 “A video from a farm in New Zealand, Otaika Valley Free Range Eggs, has been making the rounds on social media in recent days, and it’s easy to see why,” writes Stephen Messenger in an article on The Dodo.

Reason for the video’s online success is the fact that the family-run farm eschews the practice of confining chickens to battery cages — and instead lets the birds roam on its lush 10 acres, according to the article.

“We chose one of the world’s most beautiful and fertile farms as home for our flock. We feed them on high quality grains and proteins and finally (now here’s the trick) we leave them in peace to do what nature intended them to do,” said farmer Peter Sandle.

The clip, which shows the flock of chickens outside running free in the morning sun, has been viewed more than 1 million times online.

“We’re overwhelmed by the positive response we’ve received from our Youtube video — we had no idea it would go viral around the world and be viewed as much as it has,” the farm wrote on Facebook.