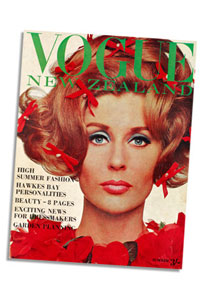 New Zealand is known for its edgy fashion exports such as Kate Sylvester and Zambesi, but a retrospective exhibition on now at Te Papa reveals a lesser known secret: the land of the long… 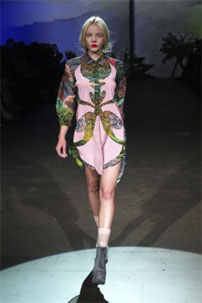 Auckland born singer Gin Wigmore, 23, has been described by PBS Melbourne music manager Peter Merrett as a “waif-sized girl” with “indefinable power and passion combined”. Wigmore says if she were to compare her…

New Zealand-raised Louise Chunn, Psychologies magazine’s new editor, “is an outsider who made it” according to the Guardian’s Stephen Brook. After stints at, among others, Elle, the Guardian, Vogue, InStyle and Good…

London-based New Zealand jewellery designer Jessica McCormack, was recently invited to design the 2009 winner’s trophy for Fashion Fringe at Covent Garden. The trophy (pictured above) featured an architectural rose as a symbol…

Be Seen In Wickstead

Auckland-based fashion designer Karen Walker is included in Russh Australia’s January/February edition as one of the magazine’s “favourite creatives” asked to share her current obsessions and influences. The inspiration for Walker’s last collection ‘The…

Cool on the Catwalk

The 2008 Air New Zealand Fashion Week in Auckland is followed by Australian Vogue who review the second day of the event at Trelise Cooper, Stolen Girlfriends and Deborah Sweeney shows. Cooper supplies “something…

Since 1992, New Zealand art collector Alan Gibbs has commissioned both national and international artists to contribute to a sculpture park on his farm in Kaukapakapa, Auckland. New York artist Tony Oursler’s video projections…

Karen Walker features in the latest Sample publication by Phaidon – 100 Fashion Designers: 010 Curators. The idea behind the Sample series is for industry insiders to curate a selection of their favourite work within…

Actor Martin Csokas is hailed as “the new Russell Crowe” in the July issue of Australian Vogue. Csokas’ recent projects include The Bourne Supremacy with Matt Damon, Asylum with Natasha Richardson and Sir Ian…

Viva magazine features New Zealand fashion designer Frances Howie, named one of the eight designers to-look-out for by British Vogue. Howie is designing in Paris for one of France’s oldest couture labels,…

Te Papa’s ‘Japonism’ exhibition reviewed in August’s Australian Vogue. A joint collaboration with the Kyoto Costume Institute, the show explores the influence of Japan on Western fashion from 1860 to the present. ‘Japonism’ -…

Habitual – brainchild of Kiwi designer Nicole Garrett – is officially the coolest denim line on the street. The range is now stocked by big-gun retailers including Barneys (New York and Japan), Colette (Paris),…

Australian Vogue‘s A-Z of deluxe travel destinations includes the historic Eichardt’s Private Hotel in Queenstown. Built in 1873 and recently refurbished by new owners, Eichardt’s contains “a series of luxurious interiors, with a clever melange of…

Auckland artist George Nuku’s mother-of-pearl pendants draw inspiration from his Maori cultural heritage and feature on the cover of June’s American Vogue. “Pile on multiple pendants for a modern, urban edge”, Elle’s ‘make it your…

“She may be the most successful designer New Zealand has ever produced”. NYNZer Rebecca Taylor featured in extensive portrait in Vogue (Australia). Click here. And acclaimed in an emerging designers post-Sept 11 fashion…

Australian Fashion Week: “The All Blacks Are Well Ahead of The Wallabies”