Tom Cruise sang the praises of Aotearoa to the US on his promotional tour for The Last Samurai, the Japanese military epic filmed largely in Taranaki. As well as the beautiful scenery and friendly…

Tom Cruise – Taranaki’s favourite adoptive son – has come to the financial aid of a local school. The Edge radio station had offered $5,000 to whoever could get the Hollywood star on air….

Hollywood A-listers Tom Cruise and Gwyneth Paltrow are both currently on location in NZ. Paltrow is in Dunedin filming scenes for Christine Jeff’s adaptation of the life of Sylvia Plath, while Cruise has set… 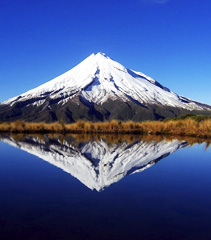 Taranaki’s eponymous mountain is a suitable double for Mount Fuji, or so thinks Edward Zwick (Glory, Legends of the Fall) who will direct Tom Cruise in The Last Samurai later this year. New Zealand’s…