Tag Archives: The Fellowship of the Ring

The Piano and The Fellowship of the Ring both made SMH‘s list of the top 100 movies of all time. “For the first time in a century, Hollywood was beaten in the big budget…

“For the first time in a century, Hollywood was beaten in the big budget fantasy stakes. Jackson and his team delivered better special effects and better story-telling in what could be the new millennium’s… 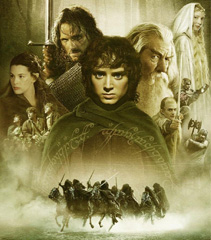 The Fellowship of the Ring won the Hugo Award for best dramatic presentation at the World Science Fiction Convention in San Jose, California. In attendance for the ceremony were Sean Astin (A.K.A Sam Gamgee) and NZer…

“There’s an advert currently going out on Virgin radio encouraging listeners to go to the cinema this Friday. It does urge you go to a film but only because this is the first opportunity…