Fitzy on the Ball

Sean Fitzpatrick gives a lengthy interview in the Irish Times. The legendary All Black captain is currently based in London as a TV analyst and motivational speaker. He is also a charity ambassador (along with Martina Navratilova,…

In a daring jungle escape, a Kiwi, Major David Lingard, and three British officers on peace-keeping duty in Sierra Leone, evaded capture by rebels, one of whom, clad in a stolen UN uniform taunted, “I have… 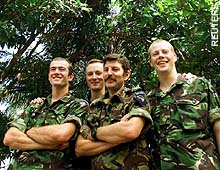 For three days and three nights, New Zealander, Major David Lingard and three British officers struggled through 50 miles of dense African jungle on the run from murderous rebels in a remote part of Sierra Leone.