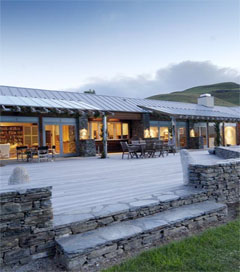 Home On The Range

A Queenstown detached home with “views of the mountains, deer roaming nearby, and hills that change colour with the seasons,” is the Wall Street Journal’s ‘House of the Day’. On the market for NZ$4.35…

With glass and steel

David Hovey, the New Zealand-born, award-winning architect who owns Optima Inc. in Arizona says his dream home would be a contemporary home built of steel and glass built near the ocean in New Zealand…

New Zealand-born architect David Hovey discusses the designs of his 30-year-old Chicago-based business Optima Inc., which he says are influenced by an appreciation of the outdoors. A trace of an accent reveals his roots….