Golfer Bob Charles, 74, has been made a member of the Order of New Zealand (ONZ), restricted to 2 living New Zealanders, in the New Year Honours. Carterton-born Charles was the first left-hander to… 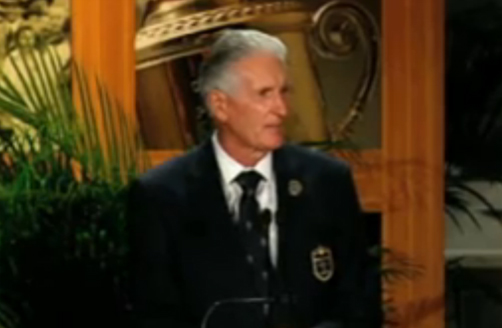 Carterton-born golfer Sir Bob Charles, 72, has been inducted into the World Golf Hall of Fame in the veterans category – the Hall of Fame’s first New Zealander, and its first left-hander. Charles won…

NZ golfing great, Sir Bob Charles, made his last ever appearance at the NZ Open – an event he won for the first of 4 times as an 18-year-old amateur in 1954. Said Charles, prior to…

“A champion no one knew. A finish no one can forget.” In New Zealand’s greatest golfing moment since Bob Charles won the British Open in 1963 Craig Perks shot a stunning final round to clinch the Players’…

A Bob Either Way

“The only cast-iron certainty in golf right now is that New Zealand veteran, Bob Charles, will finish in the top six in the British Seniors Open.” The Belfast Telegraph correctly placed its bet on the Kiwi left…

On the occasion of the millennium British Open the Royal and Ancient celebrated past champions, including Kiwi Bob Charles: “Thirty-seven years after he became the first left-hander to win the title, New Zealander Bob Charles still swings…