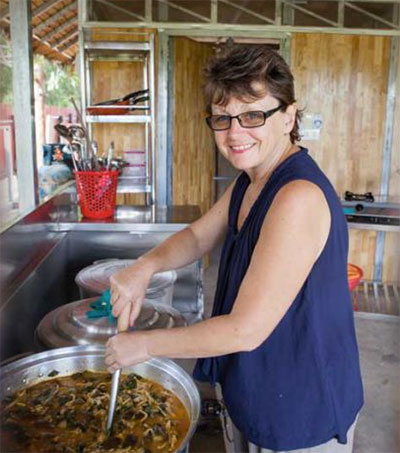 New Zealander Sue Thompson arrived in Siem Reap, Cambodia in July for four days, but stayed on in the city, opening the Kitchen of Hope which provides 100 vegetarian meals to needy children and families twice a week as well as jobs and community education in the kitchen.

The kitchen is just one part of a bigger picture. It is situated on the grounds of the Cambodia War Remnants Museum, on the way to Angkor Wat.

“This is military land and this would not happen if I did not have the support of the military,” Thompson says.

“I am honoured to be the first social enterprise that they have backed and supported with this community kitchen project.”

The site is a community collaboration. Volunteers have planted vegetables in a kitchen garden and more than 140 trees around the site.

Already, Thompson is starting to feel redundant. She says staff push her out of the way in the kitchen.

“They are taking over, and that’s what I wanted,” she says. “You want to empower [people], you don’t want to make them dependent on you, that just makes you feel good.”