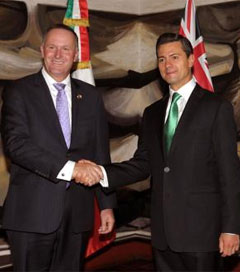 Prime Minister John Key says he and Mexican President Enrique Peña Nieto want stronger trade relationships between New Zealand and Mexico, following talks in Mexico City. President Nieto and Prime Minister Key agreed a Statement of Intent, enabling their countries business ministries to share information and carry out joint projects to grow trade and investment between the two counties. President Nieto and Prime Minister Key discussed the Trans-Pacific Partnership trade negotiations and Mexico agreed to support New Zealand’s bid for a seat on the UN Security Council.  Prime Minister Key invited President Nieto to visit New Zealand. Prime Minister Key also spoke to the Mexican Council of International Affairs during the visit. He told them that Mexico had been New Zealand’s largest trading partner in Latin American for over 20 years;  that the Trans-Pacific Partnership agreement would further increase trade between the two counties; and that New Zealand was an ‘attractive investment option for Mexican companies, especially those looking for a business-friendly hub from which to base operations in Asia.’ Mexico was the first stop-off on the Prime Minister’s South American trade mission, which includes visits to Chile, Columbia and Brazil. The Prime Minister is accompanied by 22 New Zealand business people from industries such as dairy production, horticulture, education, renewable energy and specialised technologies.