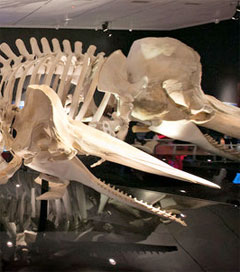 “Stand humbled” at the exhibition ‘Whales: Giants of the Deep’, a show which originated at the Museum of New Zealand Te Papa Tongarewa, and is now on at the American Museum of Natural History in New York, through 5 January 2014. “Immensity comes into play,” Edward Rothstein writes in a review of the exhibition for The New York Times. “The skeleton of a 58.4-foot-long male sperm whale – collected in 2003 as a result of a mass stranding of whales on a beach in West Auckland – is suspended at the exhibition’s centre, adjacent to a smaller female. They loom over the video kiosks, wall panels and specimens, as if daring anything to come too close.”