Doug Howlett, 30, who is based in Cork having signed with Munster in 2008, is profiled in the Irish Times which discusses the Northern Hemisphere team, his family and whether he’ll return to New…

Dan Carter is returning to New Zealand from his time playing in Perpignan, France and in the first of an exclusive two part interview with The Independent, Carter “makes an unequivocal statement about a…

Fullback Mils Muliaina will captain the All Blacks home tests against France and Italy in June, taking over from an injured Richie McCaw. “Mils is in the leaders group in the All Blacks,” New…

As Harlequins fly-half, Nick Evans “produced the greatest four minutes of controlled rugby I have been privileged to see against Stade Français” according to Times sports columnist Stuart Barnes. Evans next plays on Sunday…

New Zealand-born Zak Feaunati, a former Samoan international rugby player, has been selected to play All Black legend Jonah Lomu in the upcoming film The Human Factor. The film includes the Springboks’ victory over…

The ‘Ka Mate’ haka has been officially designated the intellectual property of Ngati Toa in a compensation agreement signed in Wellington. Ngati Toa was compensated for its decades of use by the All Blacks,…

A Maori welcome onto a marae for visitors, a walking tour with Footprints Waipoua and the All Black performance of the haka are all examples of Maori reclaiming their heritage and promoting their culture…

Wellington-born David Kirk, former All Black captain and chief executive of Fairfax, is now an Australian citizen. Kirk, skipper of the World Cup winners in the inaugural 1987 tournament, confirmed he would always… 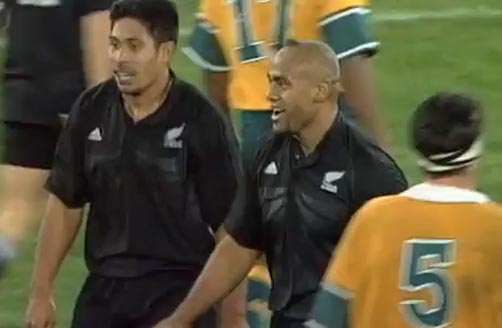 See why this match was described by many as ‘the best game of rugby ever played’.

Goodbye to a Good Guy

Former All Black front rower John Drake has died at his home in Mt Maunganui aged 49. Drake was a tighthead prop in the World Cup-winning All Blacks team of 1987. In recent years…

The All Blacks have won their third Grand Slam and the inaugural Sir Edmund Hillary Shield beating England at Twickenham 32-6. In The Independent Hugh Godwin writes: “The clever clogs who got rid of…

New Zealander and London-based publisher Martin Moodie was “probably one of only 500 in the 26,000 strong crowd” at Limerick’s Thomond Park when the All Blacks played Munster, “ and was honoured to be…

The all-Maori team first performed a haka against Surrey in Richmond in 1888 where they, according to theIllustrated London News, “cavorted about in ostrich-feather capes and tassell’d caps in a device of novelty and…

Looking Back to Black

Former All Black hooker Anton Oliver, 33, is now studying at Oxford University for an MSc in Biodiversity, Conservation and Management, but he’ll play “one more decent game” against Cambridge in the Nomura Varsity… 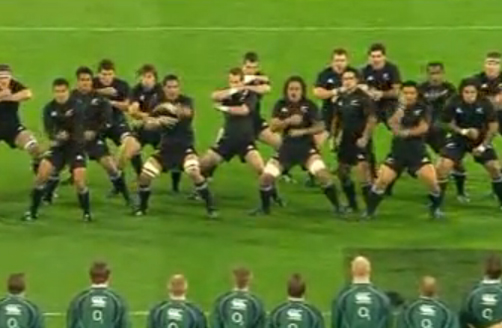 The All Blacks perform their iconic Haka before a 2008 match against Ireland.

All Black fly-half Dan Carter, who recently made number 11 on American network E! Entertainment channel’s list of the 25 Sexiest Men of the World, this week also featured in CNN’s Talk Asia series….

The All Blacks have retained the Tri-Nations title for the fourth successive year, beating the Wallabies 28-24 in Brisbane. Sustained by the brilliance of captain Richie McCaw and also Rodney So’oialo, the All Blacks…

Ambition at the Stoop

North Shore-raised former All-Black Nick Evans, 27, now fly-half for English side the Harlequins, could be the player the team needs to help them clinch a top four spot in the Guinness Premiership. So… 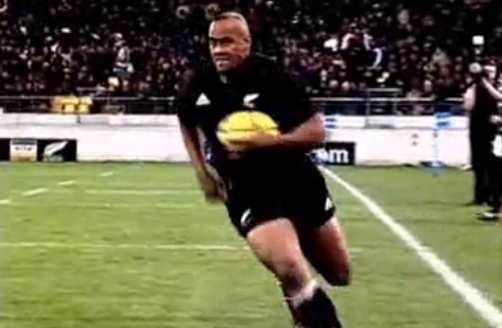 Watch some career highlights of All Blacks legend, Jonah Lomu. 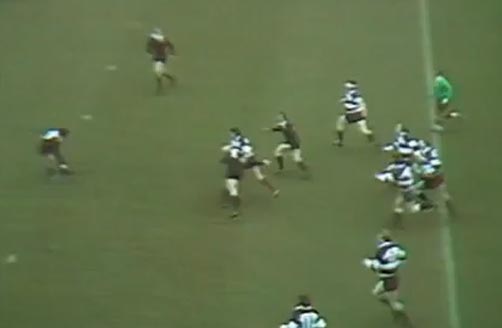 1973: All Blacks vs Barbarians

The highlights of this memorable game, including “the try”.

All Black and NZ Maori legend Pat Walsh has died of cancer aged 71. Renowned for his versatility, Walsh played 13 Tests in four positions between 1955 and 1963. He served as…

Two NZ athletes feature in a list of sport’s 20 worst injuries, as chosen by The Times of South Africa. Cricketer Trevor Franklin is ranked 17th and former All Black captain Buck Shelford 15th in a… 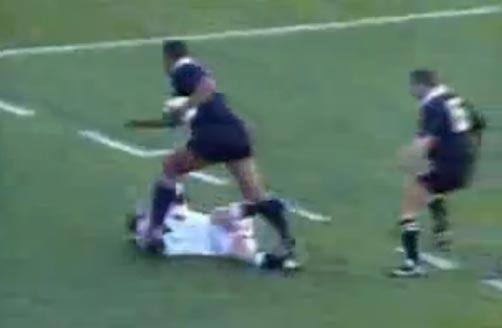 The All Blacks’ Best Tries

Take a look at some of the All Blacks’ best tries ever.

All Black Daniel Carter stars in a new viral advertisement for Adidas. The ad was shot at Carter’s parents’ house, and shows Daniel and his father talking about his childhood spent kicking goals in the back… 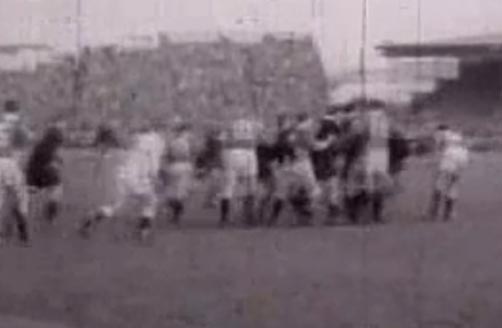 A compilation of some legendary All Blacks moments of the 1950’s. 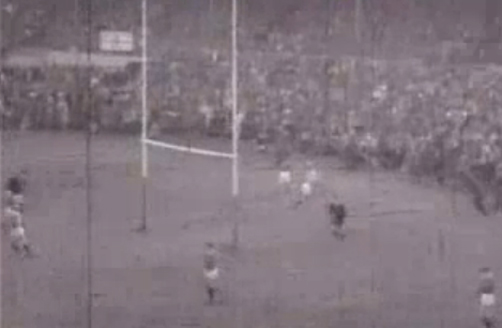 Legendary All Blacks moments from the 1950s.

Two Down, One to Go

The All Blacks have completed the final leg of their World Cup build-up by retaining both the Bledisloe and TriNations trophies, with a 26–12 defeat of the Wallabies… 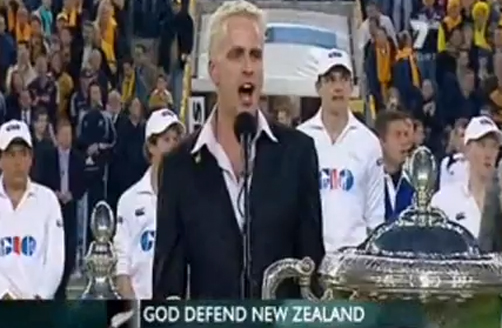 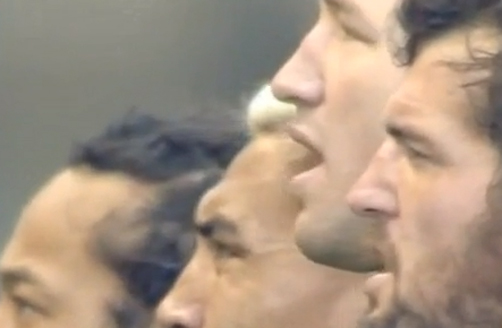 Retired NZ Supreme Court judge Ted Thomas has published an article condemning outgoing British PM Tony Blair for his “immoral and illegal” invasion of Iraq. The essay, which is written as a judicial…

Capping Off a Great Year

Following their seven-try, record-breaking victory last week against the French in Lyon, the All Blacks continued their run of success in Paris against the host nation at the Stade de France. Despite the French side showing…

In the French rugby stronghold of Lyon, the All Blacks demolished the home side and second-ranked team in the world 47-3. Dubbed “The Imblackables” by Le Midi Olympique, as a defensive unit the All Blacks were flawless…. 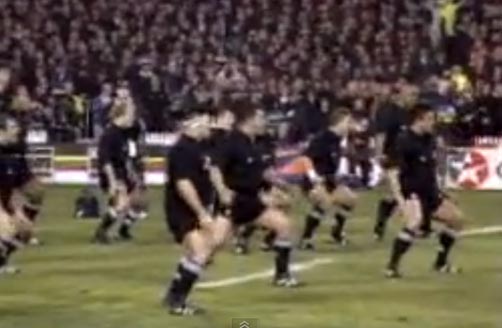 Take a look at a classic All Black’s Haka. 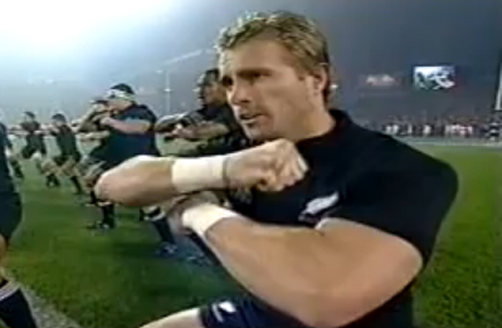 The All Blacks perform their iconic Haka before a 2004 match against England.

Rugby | Guardian (The) | Independent (The)

ABs at the Top of UK Game

Former All Blacks Carlos Spencer and Justin Marshall lead the nominations for the Professional Rugby Players’ Association (PRA) player of the year award. Described by The Independent as godlike and “the union game’s answer to Diego Maradona”,…

The All Blacks’ decisive win over Scotland on December 2 made them the first NZ side since 1978 and the first team since Australia in 1984, to complete a “grand slam” of the UK and Irish…