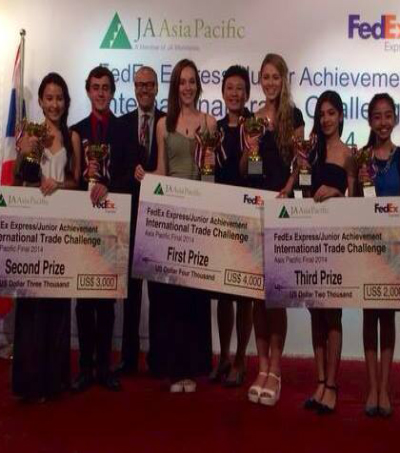 Two teams from New Zealand won both first and second place at the FedEx Express/Junior Achievement International Trade Challenge Asia Pacific, in which students in the region competed with business plans for a beauty product to market in Kenya.

Held for the eighth consecutive year, the competition hosted 54 participants, aged 15 to 19, from nine economies.

Shannon Metcalfe and Isabelle Stangl, both 18, were crowned winners for their waterless face wash that also addresses the problem of trachoma, a curable but blindness-inducing eye disease that affects more than 60,000 people in Kenya, often because of a lack of clean water to wash their faces.

“We were overwhelmed when we won the right to represent New Zealand,” Metcalfe and Stangl said.

The Kiwis were flown to Hong Kong to compete against 26 teams from the Philippines, South Korea, Singapore, Malaysia, Japan, Thailand, Vietnam, New Zealand and Hong Kong.

This year’s challenge was to come up with a business plan in less than three days for a beauty product in Kenya that would also address a social issue.

The categories were designed to make students research the culture, customer preferences and marketing strategies of a country they were not familiar with, mimicking the challenges a real exporter would face.

The winning team impressed the judges with their empathy for the Kenyan people and their redefinition of beauty.

“The Westernised view of beauty is a lot of make-up and looking sexy,” Metcalfe said. “But through our research, we found that in Kenya, beauty is natural, being able to see and live a normal life.”

The first runners-up, Amanda Ngo and Benjamin Seelen, also hailed from New Zealand. They came up with an idea for a toothpaste that fights dental fluorosis.

Deji Nela, Agustin Eclarin and Lianne Gabrielle Ramirez Hernandez from the Philippines took the third prize for their henna tattoos for oppressed women.

Metcalfe, who plans to use her share of the US$4,000 prize money to buy a car, said she already knew she wanted to go into business by starting a company that embodies the values of a social enterprise but with global reach.

Stangl said she would save the money for her exchange year. And after that? “I definitely want to go into business!” she said.

The competition’s goal is to inspire young people to use their entrepreneurial instincts to improve lives and communities.