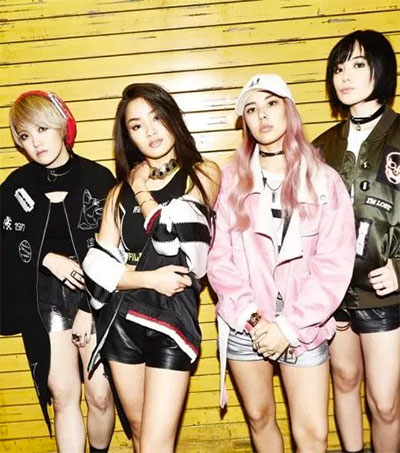 With FAKY Anna Sawai Is Broadening Her Horizons

Loads of acts around the world are proving that the pop game is now a truly global one, and FAKY continues to show the rising appeal of modern-day Japanese pop with their latest English single. New Zealand-born Anna Sawai (pictured second from left), 23, talks with Billboard’s Jeff Benjamin.

Premiering on Billboard, the J-pop girl group deliver a new version of their bold 2015 release “Candy,” reworked in English for maximum accessibility and impact, with the ladies taking a page from Fifth Harmony’s breakthrough smash “Worth It” to deliver a similarly bold and brassy track.

“‘Candy’ is the first song we ever recorded together so it’s very special to us,” Sawai tells Billboard. “It’s also the catchiest song out of the whole album, and such a fun one to perform, too.”

Made up of Anna, Mikako, Akina and Lil’ Fang, FAKY has been experimenting with new and global sounds in their international expansion, currently in the studio with British producers like DJ Fresh (whose Rita Ora collaboration “Hot Right Now” was nominated for the BRIT Awards’ British Single of the Year) and Commands (who’s worked with Charli XCX and Anne Marie), with more collaborations reported to be on the way.