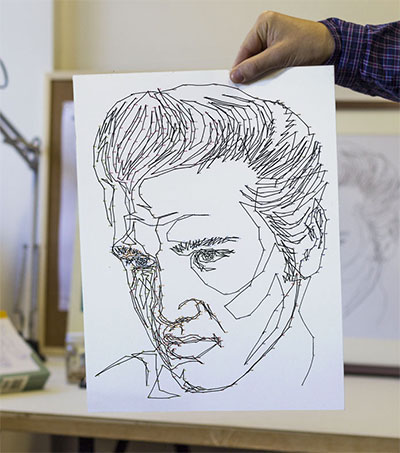 New Zealand-born designer Thomas Pavitte is taking a minimalist approach to the current craze for adult colouring books, requiring his readers to draw the images themselves and turning dot-to-dot drawing into an art form.

Pavitte started with an attempt to create a new Guinness world record by creating a giant rendering of the Mona Lisa. The poster-sized work has 6239 dots, took a week to plot and nine hours to complete. Guinness rejected the record but Pavitte has since sold more than half a million dot-to-dot books for grown-ups.

“I’ve been really surprised by the huge range of people who’ve appreciated the books and that this has become a grown-up recreation,” Melbourne-based Pavitte tells the Independent. “A lot of creative people feel drawn to the experience, and others who might feel that they don’t have an artistic bone in their body can pick up a pen and have something they can be proud of when it is completed.”

Pavitte is a graphic designer. He runs Thomas Makes Stuff online store selling various prints and commissioned illustrations all over the world.