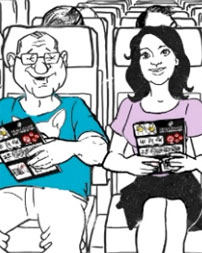 New Plymouth-born actress Melanie Lynskey, 35, appears in cartoon alongside Married with Children and Modern Family star Ed O’Neill in the latest Air New Zealand airline safety video. Melanie seems a little … disappointed that her seatmate is the Married With Children veteran. “Oh… nice,” she says after he’s introduced himself. The video, backed by music from The Naked and Famous, will be on all of the airline’s international and domestic flights by early July. Lynskey will have a role in the film adaptation of Stephen Chbosky’s cult novel The Perks of Being a Wallflower, scheduled for release later this year.