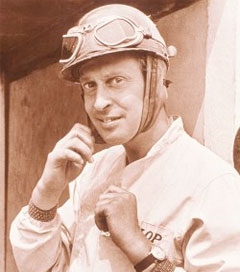 Bob Wallace, originally from New Zealand, became Lamborghini’s test driver in 1964; he was instrumental in the founding of the Italian car company. For most devoted fans,” The New York Times’ John Lamm writes, “Lamborghini history really begins with the 1966 Miura.” “Started as an off-hours project by [Gian Paolo] Dallara, [Paolo] Stanzani and Wallace, the Miura – one of several Lamborghinis named for fighting bulls – was a major departure because its V-12 was mounted transversely at the rear; the Miura made [Lamborghini] a hit with sports car aficionados.” The Jarama Rally and the Urraco Bob are Wallace’s works.