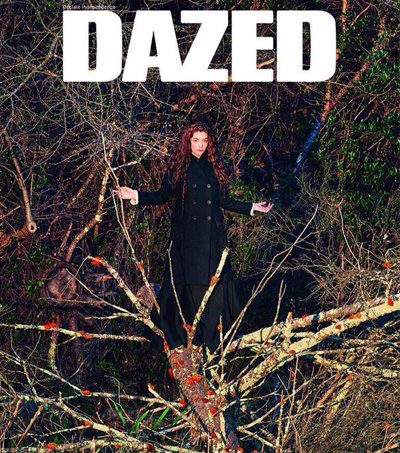 Lorde – a Force of Nature

Just a few weeks after having covered Vogue Australia, the New Zealand singer has been photographed by Ryan McGinley for the cover of Dazed Magazine’s Girls Rule the World issue.

Dazed Magazine interviewed Lena Dunham and Lorde “to talk about sisterhood, Taylor Swift and everything in between” for their annual Girs Rule the World issue.

“Judging by her ability to climb a tree in a Prada coat and Lanvin dress, it’s clear they aren’t kidding when they say she’s a force of nature,” which also is the subtitle of the cover.

“I came into this with such a strong viewpoint–even when I was 13 or 14, my sense of self felt too permanent for anyone to f–k with,” the New Zealand singer told the magazine when asked about her success.

Lorde shared some of the shoots’ photos on Twitter including images of her sitting in a blossoming tree or on a motorbike lying in a field.