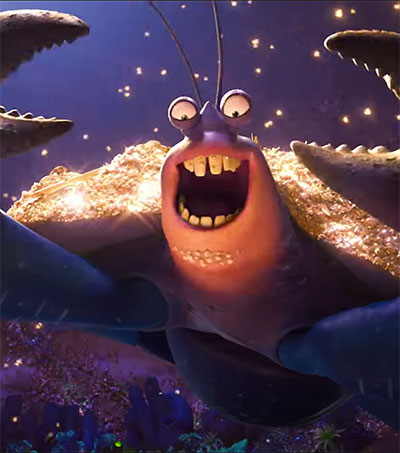 “He may appear in just one scene, but Tamatoa, the glam rock crustacean voiced by Flight of the Conchords’ Jemaine Clement, is quite possibly Moana’s most appealing character,” according to Slate’s Marissa Martinelli.

“Now you can watch the full clip of his musical number, ‘Shiny,’ a deliciously devious ode to materialism inspired by David Bowie, sung as the giant, villainous crab toys with the movie’s heroes, Moana and Maui, and refuses to give up his haul.

“Some of writer Lin-Manuel Miranda’s best wordplay is at work in the song, and with just as dash of ‘Poor Unfortunate Souls’ in the mix, the clip also highlights the character’s parallels to The Little Mermaid’s Ursula, another purple-tinged, gender-bending Disney villain.

“Good thing he had plenty of practice – Flight of the Conchords did a Bowie-inspired episode back in 2007, and it remains excellent.”

New Zealand-born comedian Jemaine Clement breaks down Wellington Paranormal for Vanity Fair and gives the Americans a crash course in New Zealand humo(u)r. The series will also introduce American audiences to the Māori…