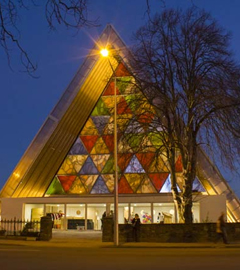 Christchurch’s ‘cardboard’ cathedral has opened, a move that is seen as a significant step in the regeneration of the city following the February 2011 earthquake that killed 185 people.  Dubbed the ‘Transitional Cathedral’, the temporary structure was designed by Japanese architect Shigeru Ban, who has been responsible for temporary public buildings in areas of Japan and Haiti also damaged by devastating earthquakes.

While called the ‘cardboard’ cathedral, the structure uses timber, steel and concrete alongside cardboard tubes. The building has an expected life of 50 years and will remain until a permanent cathedral is built. The building cost $5.3m to construct and accommodate up to 700 people.