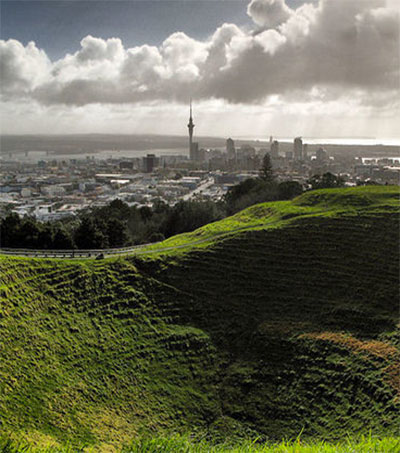 Maungawhau and Memories of an Elephant

“At 196m high, the cone of this long-dormant volcano is the highest natural point in the Auckland region,” travel site Atlas Obscura reports. “But that’s not [Maungawhau/Mt Eden’s] only claim to fame – the stone observation platform at its peak was built with the help of an elephant.

“In the late 19th century, much of one side of the mountain was quarried to build some of Auckland’s earliest homes, prisons and other structures in the region, as well as the platform atop the peak. The labourers were mostly Maori men and prisoners, but one was a royal elephant.

“Prince Alfred, the Duke of Edinburgh, was to finish his 1870s tour of the Royal Navy in Auckland. When passing through Nepal, the prince was gifted a three-year-old elephant by Sir Jung Bahadoor. Alfred named the elephant Tom, and took him along to New Zealand, much to the delight of Auckland residents who had likely never seen such a creature before.

“Over the course of the prince’s stay the elephant was kept in the royal barracks. But his strength and size weren’t put to waste. While on board the ship from Sri Lanka to New Zealand, Tom carried 300 tonnes of coal across the vessel, much to the delight of the sailors. He was put to similar work on Mt Eden’s platform, hauling heavy basalt up the mountainside. The royal pachyderm was rewarded for his labour with candy and beer.

“Today, the mountaintop platform remains one of Auckland’s most popular tourist sites for its beautiful views of the city and surrounding area. Tom’s life didn’t last quite so long, but his memory still remains. He did not stay in New Zealand, but relocated to several British zoos before his death in 1882 at the Dublin Zoo. The zoo held onto his remains, and in 2010 they were purchased by the Trinity College Zoological Museum, where they are now on display.”