NZEDGE  >  News  >  Arts  >  Like a Weird Untitled Mixtape They Beguile 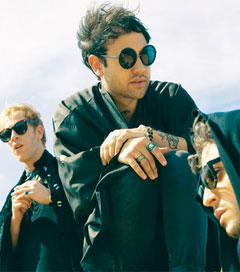 The songwriting savant behind Unknown Mortal Orchestra, New Zealander Ruban Nielson, 33, spends many of his nocturnal hours locked away in the basement of his Portland, Oregon home, creating beguiling, hypnagogic psych-pop, the Guardian’s Gwilym Mumford writes.

From Tame Impala to Temples, we’ve witnessed a surfeit of psychedelic revivalists recently, but while those bands lean towards replicating sounds from the past, UMO exist entirely on their own wavelength.

The result is alien yet strangely comforting, like a weird, untitled mixtape you found in the glovebox of a second-hand car and immediately became besotted with.

Ultimately, Nielson says, all of his alternative working methods – the twilight tinkerings, the tape experiments, the witches and wizards – have one thing in common: they all come from a part of his brain which he has no control over. “It feels like I’m backing towards some kind of destiny,” he says. “I don’t do any planning. I just try and let things bubble up like they do in a dream.”

Unknown Mortal Orchestra’s second album, II, was released earlier this year. The band tours Asia through January beginning at the venue, Yuyintang in Shanghai on 15 January.