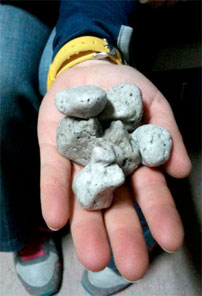 A mass of golf-ball-size pumice rocks almost the size of Belgium has been discovered floating 1000km off the northeast coast of Auckland. The 26,000 square kilometre- stretch of pumice was first spotted by an Air Force Orion and samples were then collected by the navy’s HMNZS Canterbury. Naval Lt. Tim Oscar says the rocks appeared a brilliant white under a spotlight, like a giant ice shelf. He says it’s the “weirdest thing” he’s seen in 18 years at sea. “The rock looked to be sitting two feet above the surface of the waves, and lit up a brilliant white colour in the spotlight. It looked exactly like the edge of an ice shelf,” Oscar said. Scientists say the rocks likely spewed up in an eruption by an underwater volcano.