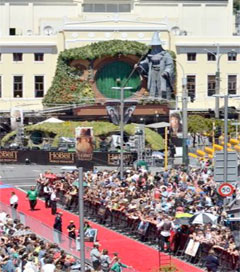 Fans Flock to Spot the Stars

One hundred thousand Hobbit fans descended on Wellington’s Courtenay Place to catch a glimpse of their favourite Tolkien character strutting the 500m-long red carpet ahead of the world premiere first installment of the trilogy, The Hobbit: An Unexpected Journey. International media were in the capital in droves, “almost never seen in this far-flung place which … sometimes dubbed Middle Earth,” Pattrick Smellie described for CNN. “Arriving by air, they will already have seen the rather amusing Air New Zealand safety briefing video in which Orcs turn off bony iPads.” The new films break ground in both audio and video. Not only were they shot digitally in 3D, but The Hobbit is also the first major motion picture to be shot at 48 frames-per-second.