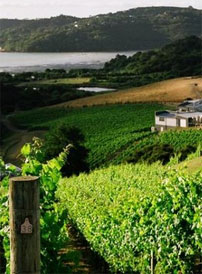 Waiheke Island’s Destiny Bay Vineyard 27 Magna Praemia has been awarded a rating of 98 out of 1 by top United States wine critic and editor-in-chief of The Tasting Panel magazine, Anthony Dias Blue — the highest rating he has ever given. In the June 211 edition of the influential magazine for the wine and spirits industry, Blue lauded the red saying it was: “velvety, luscious and ripe with concentration and intense fruit … stunning and super long.” Co-founder of Destiny Bay Vineyards Mike Spratt said the rating was a noteworthy achievement, not only for Destiny Bay, but for all of Waiheke Island’s red wine producers. “We owe a lot to Waiheke Island wine pioneers like Stephen White at Stonyridge and others around the country who worked tirelessly to produce extraordinary artisan wines and establish New Zealand’s credentials in the full bodied red wine category,” Spratt said. Destiny Bay produces fewer than 25 cases per year of their three distinct blends, Magna Praemia, Mystae and Destinae.