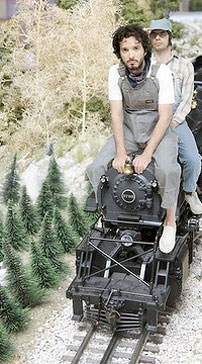 Twelve years on since their television debut on Wellington’s regional TV station, the Flight of the Conchords, Bret McKenzie and Jemaine Clement, haven’t changed. McKenzie still looks perplexed and Clement still looks like a disgruntled professor. What has changed can be summed up in two words: accolades and audience. Or maybe three words: Rod Laver Arena. That’s where the pair are playing their second Melbourne show this month — they’ve sold out the Plenary at South Wharf — during their first headline tour of Australia. The quick selling-out of the Plenary prompted the hasty addition of a Rod Laver Arena gig. It’s likely to sell out, too. Anyone who misses out might need to invoke the words of McKenzie: “I’m not cryin’. It’s just been raining … on my face.”