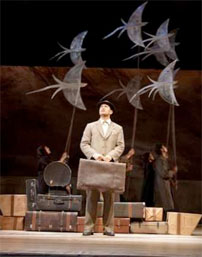 Award-winning play, The Arrival, performed by New Zealand’s Red Leap Theatre and based on Shaun Tan’s graphic novel, “fascinated” a Korean audience at the LG Arts Center in Seoul recently. The Arrival, which won six prizes at the 2010 Chapman Tripp Theatre Awards, is the story of a journey by a man to a strange, wondrous new land. The show featured puppets as little creatures such as a tadpole, a cat and a dragon tail. Director of the performance Julie Nolan said her troupe wanted to honour displaced people all around the world as their numbers grow every day. “We’d like The Arrival to pay tribute to migrants and refugees,” Nolan said.