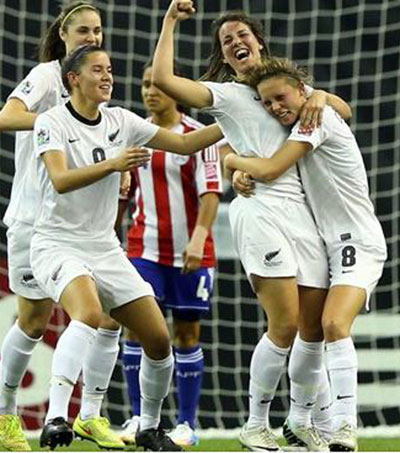 New Zealand have made a dream start to their FIFA U-20 Women’s World Cup campaign with a 2-0 win over Paraguay at Montreal’s Olympic Stadium in Canada.

The junior Football Ferns have never progressed beyond the group stage at this tournament, but are now well placed to make history.

The two goals from Emma Rolston and Steph Skilton took New Zealand to the top of Group D alongside France.

Both of New Zealand’s goals came in the space of three minutes towards the end of the first half.

Emma Rolston gave the Oceania’s champions the lead, stepping inside her marker and curling a left-foot shot just inside the post from the edge of the box.

New Zealand then doubled their advantage, as Paraguay were still reeling from that blow, thanks to an excellent strike from captain Katie Bowen.

Their advantage established, New Zealand fell back and rested on a well-organised, physically solid defence to keep the South Americans at bay.

New Zealand now go on to face a top-of-the-table clash against France.