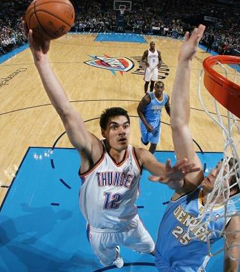 Adams on the Cusp of NBA Superstardom

New Zealand basketball sensation, Steven Adams, is causing big waves in his debut NBA pre-season games for the Oklahoma City Thunder (OCT). Some are calling for the rookie to be elevated above the starting centre, Kendrick Perkins. Adams, whose sister Valerie is a double Olympic gold medal winner in the shotput, is posting on-court numbers that are putting his more experienced teammate to shame.

Specialist sports website, Bleacher Report, notes that Adams is averaging a double-double (10 scoring shot and ten rebounds) every 36 minutes and has a field goal success rate of 62.1%. Perkins didn’t have a single double-double all last season and has never shot field goals as high as his young rival.

“This guy is a rookie? Fooled me,” writes Jared Porter.

Adams’ position as back-up to Perkins is indisputable; many now think the young man has what it takes to step centre-stage.

“What more do you want from him,” writes the DailyThunder.com’s Royce Young. “He was terrific on the boards, terrific finishing in the paint, terrific setting screens, terrific catching passes and terrific being big.

“His defence left a little to be desired but hey, he’s a 20-year-old rookie [who’s] still super raw.”

The Bleacher Report’s online poll showed more than 90% of OCT fans believe he should be the starting centre for the NBA season proper.