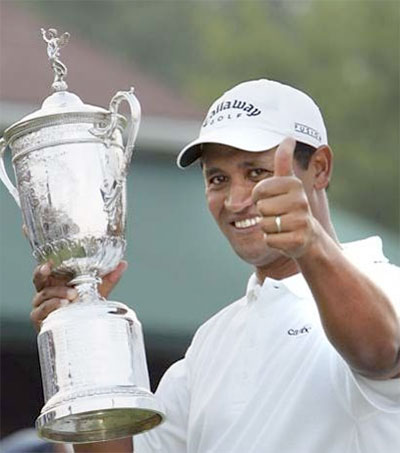 Former US Open Champion New Zealander Michael Campbell, 46, is retiring from golf to concentrate on running his golf academy in Malaga, Spain. Campbell, who won the Open at Pinehurst in 2005, told New Zealand’s…

NZ billiard legend Rocky Lane has made the sport’s Internet Hall of Fame thanks to his undefeated world record in jump shooting. In October 2005 Lane cleared all 15 balls off the table in 14.16…

CNN profiles the rash of Australasian talent currently infiltrating PGA ranks. Included in its top ten are two NZ golfers, “since to North Americans they’re Down Under, too” – Michael Campbell (world ranking 45) and Phil Tataurangi…

Top Kiwi golfer and World No.15 Michael Campbell answers the Independent’s Q&A about his routine – how he gets into the mental and physical swing of things …

We all like success: the Scots are not immune, claiming Michael Campell’s edge swing as their own.

Michael Campbell is one of four top male golfing stars to meet women’s #1 Karrie Webb in a million dollar “Battle of the Sexes” series later this year.

“The biggest move outside the top 10 was by New Zealander Michael Campbell who leaped from 108th to 14th” in the golf world rankings.”

Campbell Hits Record Breaking Haka of a Round

“The New Zealand Maori produced a spear-waving, chest beating, lip-curling, foot-stompin’ 63 in the first round of the English Open here yesterday”. Cambell’s nine under par round created a new European PGA record – no one has…

“The Maori’s return to form shows it was no fluke the first time. Currently third in the order of merit, Campbell’s outstanding recovery is illustrated perfectly in the Maori proverb: “I te tu oho koe/ Hei…