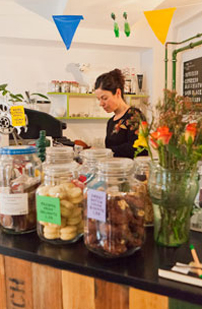 Coffee Without the Schnauzer

Newzedge editor Jane Nye, 33, and her partner Paul Milne, 44, have opened a New Zealand-influenced café in Berlin. Antipodes is reviewed in the latest issue of Exberliner, the German capital’s foremost English-language magazine….