As the Russell Crowe/Ridley Scott epic, Gladiator marks two decades since it first hit cinemas, UAE English-language daily newspaper, The National looks back at how Ait Benhaddou in Morocco formed the backdrop to some… 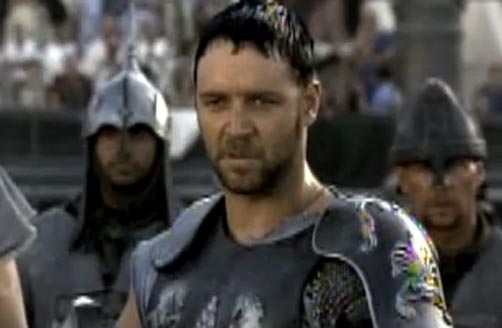 GQ’s feature on the ten greatest actors of our generation leads with Wellington-born Russell Crowe and his passion for connecting emotionally with an audience. Does this peg him as a dinosaur? “In those respects-credibility,…

“Round the Horn if You Dare”

Russell Crowe graces the cover of Time, prior to the release of his latest film, Peter Weir’s acclaimed maritime epic, Master and Commander.  His edge? “Hanks, Cruise and ladies’ champ Julia Roberts are…

Russell’s main rival for the little naked gold man was “Tom Hanks, who wears very little for much of Castaway. To the Academy this shameless overexposure smacked of desperation, an all-shorts-off attempt to counter…

An examination post-golden Gladiator coverage on both sides of the Tasman.

Gladiator, filmed in Morocco, Malta and the UK, directed by a Brit, scored by a German and “sexed up by the hottest New Zealander on the planet” is a new breed of block-buster, a…

“We already knew from The Insider that Crowe was a fine, subtle, vanity-free actor, happy to ruin his looks to play pudgy and useless. But Gladiator and Proof of Life prove that he’s also a great movie…

The “Delight-O-Meter” puts Gladiator at the top on Amazon.com.

Amazon keeps count of DVD pre-orders. Gladiator gores Perfect Storm 80 000 to 30 0000 . Also due out on DVD is Crowe’s “breakthrough performance” in Romper Stomper.

“What we do in life echoes in eternity,” Russell Crowe as General Maximus says while admonishing his battle-ready troops in Gladiator. And what we do at the box office echoes in our paychecks”.