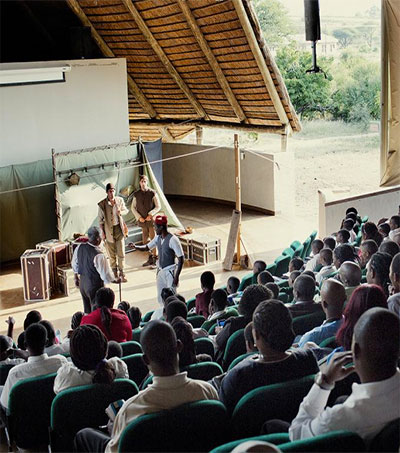 If the Globe Theatre’s Globe to Globe project has a natural figurehead, it is Rawiri Paratene, whose Troilus and Cressida in Maori opened the tour in April 2014, Intelligent Life journalist Jasper Rees writes. The unprecedented Hamlet tour is currently taking Shakespeare’s play to every single country over two years.

They have performed at sea level, looking out on the Pacific Ocean in Antofagasta and the Indian Ocean in Djibouti, and at extreme altitude: in La Paz oxygen was on tap backstage. They have often felt the dread weight of recent history: in Sarajevo, in Eritrea, in Kiev where Petro Poroshenko was in the house the night before he was elected Ukraine’s new president. In Somaliland no play at all had been performed for more than 20 years.

Above all the company speak about an epiphany at the National University of Rwanda in Butare. After two scenes, the power failed and the audience waited while stage managers and cast rapidly shifted the set outside. The heat was intense, but so was the spell cast by the occasion.

“Part of the high,” Paratene says, “was the knowledge that we were performing on a campus where murder had been committed.”

As the bleary coach leaves for Zambia, Paratene presides over a ritual sweepstake: they are told the mileage (450), given an ETA (ten hours hence), and everyone has to offer their own estimate. Long experience of 18-hour rides in Central America and Africa has taught them to be pessimistic.

After a year they are already steeped in reminiscences, Rees writes that “he can’t help but worry about the coming void for this spirited, adventuring, inexhaustible family of storytellers after the terminus of their unrepeatable voyage.”

“Ending is natural,” Paratene says. “Emotionally it’s going to be hard because there’s not much we don’t know about each other. There will be an awful period of withdrawal. But by God, if we two or three of us get cast together again, it’s going to be incredibly boring for the other people in the company!”

The Hamlet tour stops in Istanbul for shows on 10 and 11 November, before heading to Ashgabat, the capital city of Turkmenistan.

Paratene was born in Hokianga in 1954.